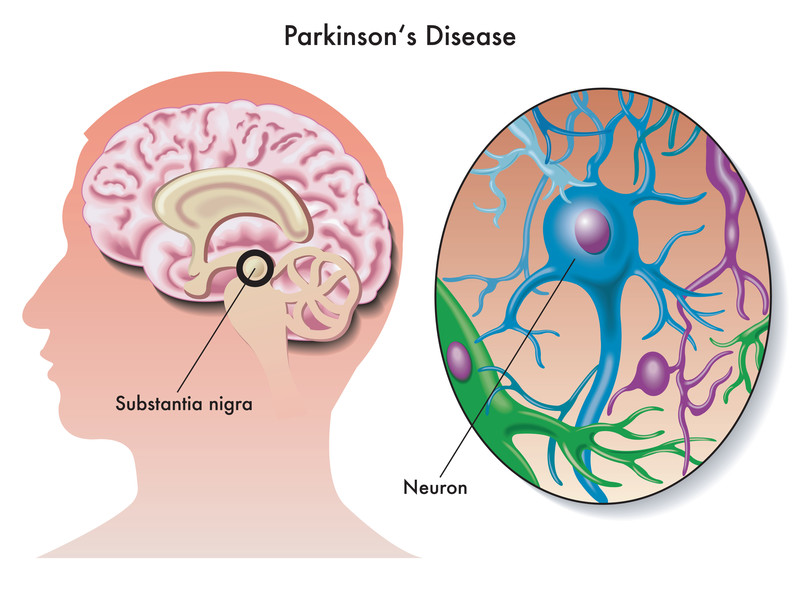 Parkinson's disease (PD) is a degenerative brain condition that leads to a dramatic loss in a person's quality of life. According to the Parkinson's Foundation, there are an estimated one million Americans suffering with Parkinson's disease today, and another 60,000 people are diagnosed with it every year. Worldwide, the disease afflicts an estimated 10 million people. Symptoms of Parkinson's range from stiffness in the muscles and joints to uncontrollable shaking, eventually including difficulty or even the inability to walk and talk normally. While there are treatment methods, including medications and therapeutic surgery that can alleviate some symptoms, there is currently no cure for Parkinson's disease. Stem cell research holds great promise, though.

Parkinson's disease is a brain condition, like Alzheimer's. However, it differs significantly from dementia-related conditions, and patients do not suffer the same type of symptoms. This disease is caused by the damage to or destruction of neurons in the brain that are responsible for the production of neurotransmitter dopamine. It is exacerbated by the loss of nerve endings that produce norepinephrine, which is responsible for communicating signals in the non-sympathetic nervous system, and controls many automatic bodily functions. As of the time of this writing, scientists are not sure what causes the destruction or damage of nerve endings and neurons in Parkinson's patients. Parkinson's disease seems to be only partially hereditary. Genetics does seem to play a role, but many researchers suspect that exposure to toxins, along with other factors, also plays a role in who develops Parkinson's disease, even among those who might be predisposed to the condition.

Stem cells are "generic" cells found in all human bodies. They are precursors of every single cell type in the body, and are present from before the development of a human blastocyst. Over time, the concentration of stem cells in the body dwindles, but they never disappear, and remain a critical part of the body's repair system. Stem cells are unique from all other cells in the body for one thing - they can transform into any type of cell necessary. While some stem cells are predisposed to transforming into a particular type of cell, they can be induced to transform into any desired cell type. This makes them invaluable in treating an incredibly wide range of diseases and medical conditions, ranging from cancer to Parkinson's disease. There are two sources or types of stem cells. A patient's own stem cells (called autologous stem cells) can be used. These are usually harvested from the fat or bone marrow. However, autologous stem cells are largely ineffective and have shown lesser value as a treatment method. Allogeneic stem cells are sourced from umbilical cord blood, or umbilical cord wall tissue, and have shown tremendous potential. These stem cells do not cause any sort of immune system response in patients, and are both young and energetic, meaning they have a much higher rate of divisibility within a patient's body. Once transplanted, it takes a few weeks for allogeneic stem cells to divide and multiply, although some benefits are seen almost immediately in many cases.

How Are Stem Cells Being Used to Treat Parkinson's Disease?

First, understand that all Parkinson's disease-related stem cell studies are currently being conducted on animals, not on humans. Both rodents (mice and rats), and monkeys, have been tested with stem cell-related treatments, and both have shown significant promise. The brunt of stem cell research and development for treating Parkinson's disease lies in the area of creating new cells that produce dopamine. This is the core cause of PD in humans, although the cause of dopamine-producing cell death or damage is not yet understood. Stem cells have the unique ability to transform into other types of cells, so transplanting them into the brain and then inducing them to change into dopamine-producing cells is possible. This is very similar to the research being conducted with stem cells to treat diabetes, through the development of insulin producing cells within the pancreas. The ability to create dopamine-producing cells with stem cells is a reality. The challenge has been creating cells that will not encourage cancerous tumor growth, and that will be accepted by the host. A team of researchers in Japan successfully introduced human stem cells into test monkeys that suffered from symptoms similar to Parkinson's disease in late 2017. The team used immunosuppressant medication to prevent cell rejection, and studied the animals for two years. Not only were the cells not rejected, but they did their job in secreting dopamine within the test animals' brains, alleviating the symptoms of PD and slowing the disease's progression. Additional research in Sweden used embryonic stem cells (allogeneic stem cells) to create dopamine-producing neurons within rat brains. The research team proved that neurons created through stem cells function just as well as those naturally occurring within the human brain. Of course, the challenge is this - while new neurons can be created within the brains of those with Parkinson's disease, this only slows down the progression of the disease. Those neurons eventually die as well, and the disease progresses. While this is a very promising development, it is not yet a cure. In order to arrest and reverse PD, researchers need to identify the cause of neuron damage and address that. Otherwise, the only path forward would be an ongoing series of neuron transplants into patients' brains. Stem cells may be introduced directly into the brain by a neurosurgeon, but such treatment is very invasive and full of its own risks. Stem cells may be delivered through a vein as well. Such cells cannot penetrate blood-brain barrier, but they produce active extracellular elements such as cytokines and trophic factors which float into the brain and assist in its repair.

The Future of Stem Cells and Parkinson's Disease

Human trials are the next step for stem cells and dopamine-producing neurons. As of the time of this writing, no research team has taken the step from animal testing to human testing, although many are on course to do so in a very short period of time. From there, it is only a matter of time before stem cell transplantation becomes an accepted medical treatment for slowing the progress of Parkinson's, with a cure hopefully on the horizon.