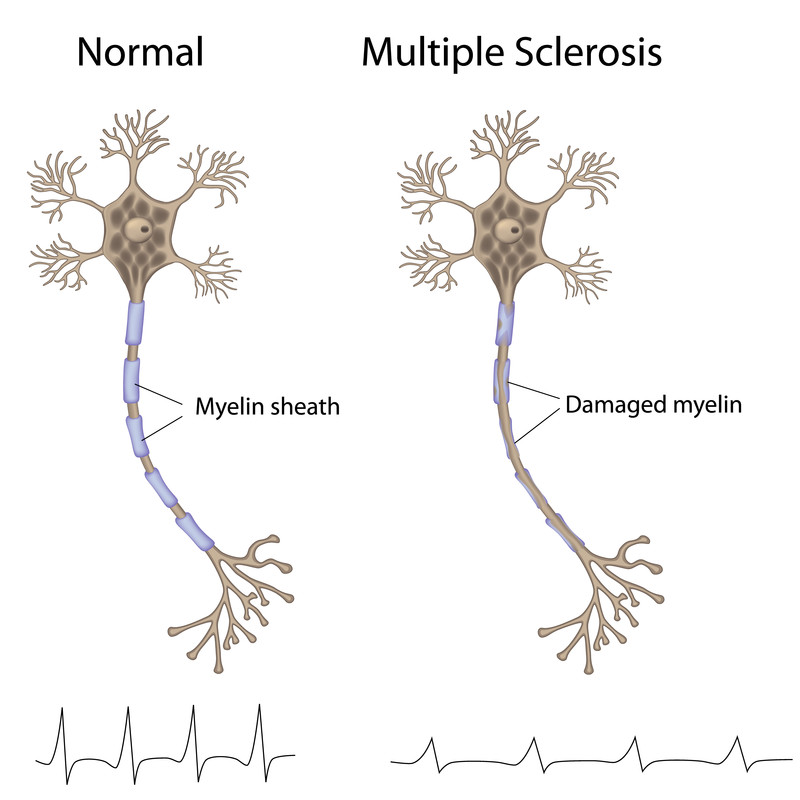 Multiple sclerosis (MS) is a debilitating disease that affects over 2.3 million people worldwide, with nearly 400,000 of those sufferers living in the United States, according to Healthline. Those suffering from MS can experience a wide range of symptoms, including pain and numbness, loss of movement in limbs and extremities, intense fatigue, blurred vision and even speech problems. Note that MS is one of the leading causes of disability in young adults, and while there are treatments that can mitigate the severity of the symptoms, there is no cure. Stem cell research is being pursued as a possible avenue to treat multiple sclerosis.

What Is Multiple Sclerosis?

Multiple sclerosis is an autoimmune disease. That is, the patient's own immune system attacks the body. In the case of MS, the immune system attacks and destroys the myelin sheaths that cover the axons of nerve cells in the brain, spine and other areas of the body. Myelin is a specific type of fat that covers the axon, or connector, that allows those cells to transmit signals to one another, and to the brain itself. When the immune system attacks those sheaths and destroys them, axons become inflamed. Over time, this inflammation leads to the development of scar tissue. This can cause pain and discomfort, as well as a wide range of other symptoms. Note that the immune system not only attacks the myelin sheaths, but also the cells that produce the fat in the first place. When these cells are destroyed, myelin can no longer be produced.

Stem cells are part of the body's natural repair and regeneration toolkit. They're actually "blank" cells that can transform into any other type of cell. Stem cells are present before the formation of the fetus in a human embryo, and transform into every tissue type in the body. They remain present through birth, into childhood, and throughout adulthood, although their concentration in the body drops as we age. Stem cells already play a role in defending against MS. These cells attempt to repair the myelin sheath on nerve endings, and even replace the coating of fat after the immune system attacks. The problem is that the immune system will continue attacking and destroying the myelin sheaths, and the body's own stem cells are not sufficient to stop it. There are two types of stem cells used to treat patients with MS. Autologous stem cells are those harvested from the patient's own body, usually from bone marrow, but also from fat and other tissues. These stem cells have shown to be only moderately effective in treating MS and other medical conditions. Allogeneic stem cells, on the other hand, have shown to be quite effective in many instances. These stem cells come from umbilical cord blood or wall, which is a rich source of allogeneic mesenchymal stem cells and matrix material, and does not require genetic matching.

How Are Stem Cells Being Used to Treat MS?

Note that there is currently no approved treatment option that replaces cells in MS sufferers. However, stem cells are being studied for their use in a wide range of different treatment types that may eventually be approved for general use. Preventing Damage: One of the treatment methods being explored with the use of stem cells is to prevent damage from occurring to myelin sheaths and the underlying nerve axons. Stem cells naturally present in the patient's body already attempt to do this, but transplanting allogeneic stem cells in larger numbers could improve the body's ability to repair damage. Building a New Immune System: Some researchers are taking the approach of resetting the immune system itself, and rebuilding it from scratch. In this scenario, chemotherapy and radiation therapy are used to destroy the patient's immune system. Genetically matched adult stem cells are then introduced into the body, and the immune system is rebuilt. This method has seen some success in clinical trials. However, because umbilical cord blood and wall stem cells require no matching, there is no need to suppress patients' immune systems and such treatment may produce even better results. Repair Capabilities: Another branch of stem cell research deals with combining pharmaceuticals with stem cells in an attempt to augment their repair capabilities. Different drugs are being explored for their ability to support and enhance the natural repair capabilities offered by stem cells (often augmented by allogeneic stem cell transplantation to increase the number of stem cells available within the body). Neuron Replacement: Finally, some researchers are focusing on using stem cells to replace nerve and brain cells destroyed by MS and similar neurologic conditions. A similar approach has been taken with stroke victims, where transplanted stem cells transformed into brain cells and allowed patients to regain control over their speech and their limbs.

The single largest challenge that faces stem cell treatment for MS sufferers is the nature of multiple sclerosis itself. Because it is an autoimmune condition, the body's immune system continues to attack myelin sheaths over and over again. Currently, the only way to prevent this is to destroy or completely suppress the immune system, which is not a long-term solution, and can lead to unwanted complications even in short-term situations. Umbilical cord stem cells are immunomodulatory, so they are capable to regulate immune system instead of suppressing it. There is also the fact that the underlying trigger that causes the autoimmune response differs from patient to patient. This means that treatments must often be customized to a specific individuals' trigger, and that treatment will not work for another MS sufferer. However, the use of allogeneic stem cells could allow treatment without the need to suppress the patient's immune system, allowing transplanted cells to divide and multiply, and heal the damage. Complicating the situation is the fact that scientists are still unsure how myelin sheaths are created in the first place. Research is ongoing, but researchers still do not have a clear understanding of the process involved.

While stem cell treatment for multiple sclerosis remains experimental, the future is bright. Ongoing research continues to highlight the fact that stem cells can play a central role in not just repairing myelin sheaths, but in preventing the immune system from attacking the body in the first place.