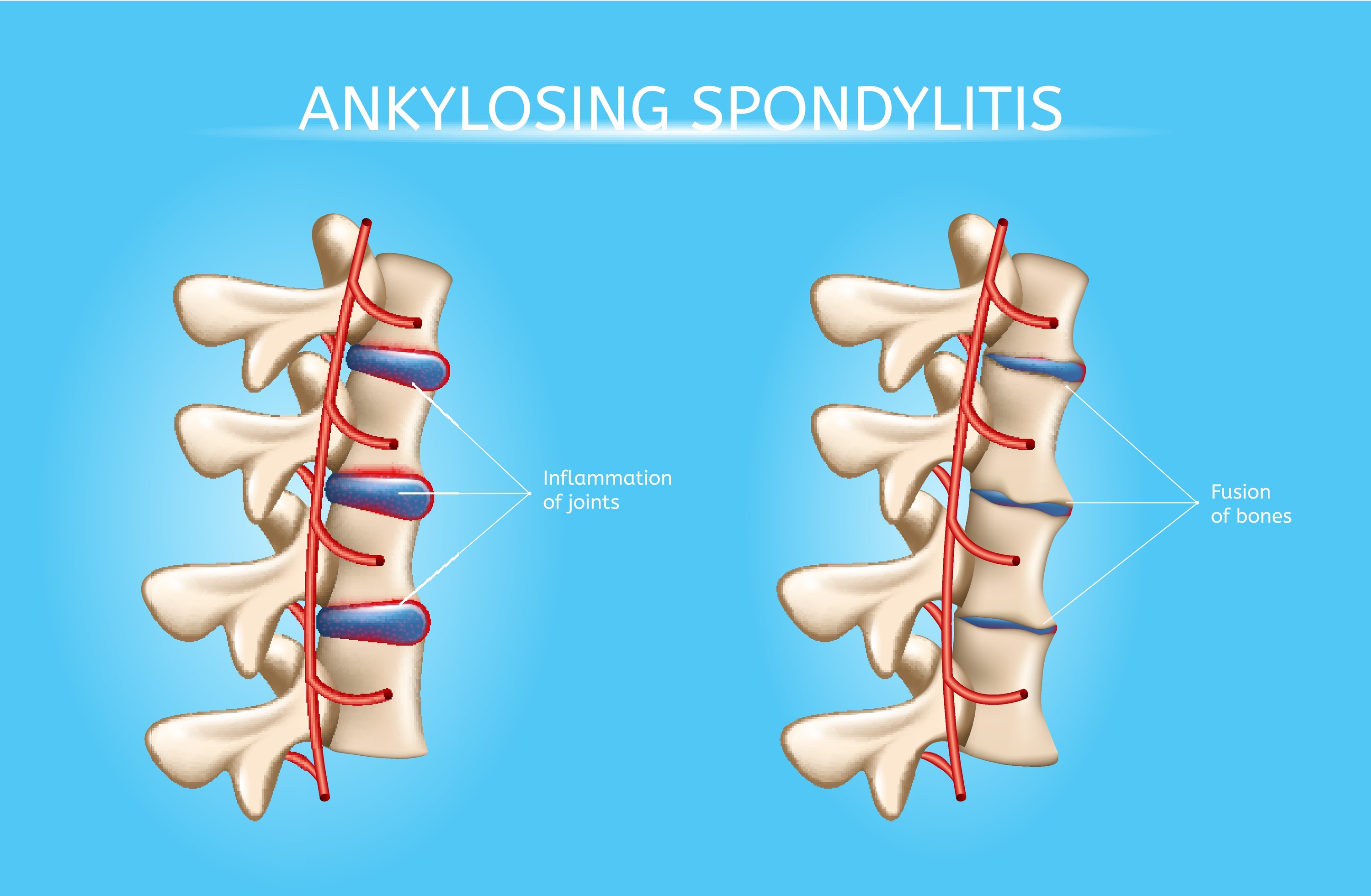 Every year, over 200,000 additional people in the United States are diagnosed with ankylosing spondylitis – a painful condition that affects the spine. Ultimately, this condition can last for a lifetime without proper treatment, and it can be incredibly debilitating.

What Is Ankylosing Spondylitis?

According to the Spondylitis Association of America, ankylosing spondylitis is

“a form of arthritis that primarily affects the spine, although other joints can become involved. It causes inflammation of the spinal joints (vertebrae) that can lead to severe, chronic pain and discomfort. In more advanced cases, this inflammation can lead to ankylosis – new bone formation in the spine – causing sections of the spine to fuse in a fixed, immobile position.”

This new bone formation can add complications to an already difficult situation. The bone forms as part of the body’s natural healing and regeneration process, but it eventually seals the gaps between individual vertebra. This leads to fusion – two vertebrae essentially become one, which makes them stiff and unable to move. This can also affect the ribs, reducing their natural ability to move. Sacroiliac joints are frequently involved and, in combination, those processes cause chronic back pain.

“Ankylosing spondylitis is an inflammatory disease that, over time, can cause some of the vertebrae in your spine to fuse. This fusing makes the spine less flexible and can result in a hunched-forward posture. If ribs are affected, it can be difficult to breath properly.”

As mentioned, the primary complication associated with this condition is the growth of new bone material in the spine and in the ribs. However, there are additional complications that might be present, including inflammation of the eye, which can include sensitivity to light and blurred vision, as well as a thinning of the bones during early stages of the disease, which can lead to compression fractures. Finally, the disease can also affect the heart by causing an inflamed, enlarged aorta.

As with many other conditions, particularly those involving inflammation and irritation, there is no discernable single cause of ankylosing spondylitis. There is a genetic component to the disease, so those who have a family member with the condition are definitely at a greater risk of developing it. There are other contributing factors, as well. For instance, it strikes more men than women, and it generally occurs during the late teens and early adult years.

What Are the Symptoms Experienced by Ankylosing Spondylitis Sufferers?

The symptoms experienced by ankylosing spondylitis sufferers will change over time as the condition progresses. In early stages, the most common symptoms include pain and stiffness in the lower back, as well as in the hips and even buttocks. This discomfort usually gets worse with rest, and is alleviated to at least some extent by movement. Back pain during the night and feeling very stiff in the morning are also common symptoms.

As the disease progresses, the stiffness and pain worsen. This is particularly true once new bone material begins to form and vertebrae fuse together. If the ribs are affected, breathing difficultly may also be a symptom. It’s also important to note that many other areas of the body can also be affected.

Pain and inflammation can also be present in:

What about Conventional Treatment Options?

There are three types of conventional treatment available for those suffering from ankylosing spondylitis – medication, physical therapy, and surgery.

Medications – A number of different medications may be used to treat this condition. NSAIDs are commonly used during the early stages, but a TNF blocker may be prescribed if NSAIDs do not help. The most common TNF blockers used in relation to ankylosing spondylitis are Humira, Cimzia, Enbrel, Simponi, and Remicade.

Physical Therapy – Physical therapy can provide the means to improve range of movement and help maintain proper posture over time. Note that much of this will focus on proper sleep and walking positions.

Surgery – While reserved as a last resort, surgery may help sufferers with severe symptoms. Surgery is generally only performed in cases where there is severe joint pain and damage, or if a hip joint must be replaced.

How Does Stem Cell Therapy for Ankylosing Spondylitis Work?

Stem cells have been heavily researched for several decades at this point. These cells are the building blocks of the human body, and they form the core of our regenerative healing system. They can heal virtually any type of tissue, and can even transform themselves into different types of tissue cells to speed healing. A great deal of research into stem cell therapy to treat ankylosing spondylitis has been done, with several successful medical trials on human patients being performed.

One such study, published in the journal Experimental and Therapeutic Medicine in late 2017 involved five patients with ankylosing spondylitis. The patients were given an infusion of mesenchymal stem cells derived from umbilical cord blood (allogeneic stem cells, rather than autologous stem cells). Following the treatment, the study’s authors noted,

“The symptoms of AS were alleviated in all patients. The present study indicates that intravenous transfusion of uMSCs is safe and well tolerated by patients and that it effectively alleviates disease activity and clinical symptoms.”

The study above echoed the results found in an earlier study, which was published in 2014. It took place over the course of 20 weeks and involved patients with ankylosing spondylitis receiving infusions of mesenchymal stem cells. The study found that inflammation decreased steadily throughout the treatment, with significant changes as early as four weeks into the 20-week period. Again, the study’s authors concluded that IV infusion of mesenchymal stem cells (allogeneic, not autologous) was

“a feasible, safe, and promising treatment for patients with AS.”

In the end, stem cell therapy using allogeneic stem cells is very promising, and has shown significant improvement within patients involved in clinical studies. However, this treatment method is not approved by the FDA, and is considered experimental.